In times when mobile banking is part of banks' development strategies, having a mobile application that not only meets usability standards, but also takes maximum care of user experience, becomes more important than ever. On our market we can already point to banks that seem to recognize this and are constantly improving their mobile solutions.

While searching for the best solutions among banks' mobile applications, it is impossible not to refer to the rankings published a few times a year, which indicate the best products in terms of widely understood comfort of use (applications are most often evaluated according to the number of functions they have, their usefulness or availability for various platforms).

What is visible at first glance, is primarily the growing number of evaluated applications (which undoubtedly proves dynamic development of the market), but also taking places on the podium of various competitions by the same banks. One of the leaders is Bank Pekao SA, whose application won this year's ranking of the Money.BZWBK24 mobile and eurobank apps were awarded in the first edition of Mobile Trends Awards and took the third place in the last year's Symetria "Pocket banking apps" ranking, where the GoMobi service was also a media patron.pl

The BZWBK24 mobile application, which, after its new version in October last year, has been receiving more and more distinctions, has been rated better and better (m.in. The first place in the Mobile Trends Awards 2013 competition or the second place in the Money.pl website). The aforementioned rankings also recognise the eurobank app (first place in the "Pocket banking apps" ranking and a nomination for the Mobile Trends Awards 2013).

All the applications mentioned above are undoubtedly characterized by a wide range of banking operations that can be performed (which should not surprise anyone since one of the main criteria of the rankings is the number of functions they have). For example, Eurobank customers can use the app to block an identity document, and Bank Pekao SA customers, in addition to making one-time transfers, can view and define standing orders. BZWBK24 mobile application focuses on a number of functionalities almost unheard of in other applications – transfer to a phone number, withdrawal of money from an ATM, scan and pay option or the whole m-commerce module.

A wide range of functions is an important feature not only from the point of view of rankings, but also from the perspective of the user. Despite the fact that the customer most often uses the application to check their account balance, transaction history and to make a transfer, they also expect other functions. This has been shown m.in. In the study "The role of mobile finance in the lives of Poles", prepared by TNS Poland, I am.mobi and Getin Bank, where the majority of people declared that they would prefer to have one comprehensive application containing all the functions just in case (even if some of them were not used most of the time). Of course, one should bear in mind that these are only declarations of the survey participants. Regardless of that, the user should not have to learn and remember about the functional scope of the application – it is important that he/she can perform a given action whenever it is needed.

The above observations were confirmed to some extent in a recent study conducted by Symmetria. It was observed that people who do not use banking applications expected the functional scope of the application to be a perfect copy of the transaction system they know from their desktop devices.

Analyzing the behavior of mobile banking application users, it can be concluded that a more important principle than providing a number of functions is to provide easy access to the most frequently performed operations (checking account balance, checking transaction history and making a transfer). In BZWBK24 mobile and in the eurobank application, the account balance is visible immediately after logging in. Eurobank additionally provides a widget, which allows you to check your account balance and 3 recent transactions directly from your desktop (which is also available in several other applications).

At this point we should mention another product – a new mBank application which outperforms other solutions in terms of easy access to popular operations. Designers have tried to make access to the transfer as short as possible. It is enough to tap on a given icon appearing on the screen before logging in, enter the PIN and you will be transferred to the transfer screen. Easy access to operations requires a well thought-out information architecture, which in the analyzed applications is quite well designed.

Another issue is the possibility to go to the transfer execution from the account details screen, but also a summary of the status of various bank products (e.g. The possibility to filter fields (e.g. deposits, loans) on the first screen of the application – such possibility is offered by eurobank and BZWBK24 mobile.

A well-designed application facilitates the user's work at every stage, often providing small solutions that make various operations more pleasant and easier to perform. What you can praise the described applications for is the attention to detail (although not always, which is discussed in the next paragraph).

For example, in the BZWBK24 mobile application or Pekao24, when entering the account number, digits are automatically formatted, which significantly facilitates the verification of the number given. Moreover, the fields in the forms are properly grouped and automatically filled in, which makes the whole process of filling in the data seem easier. 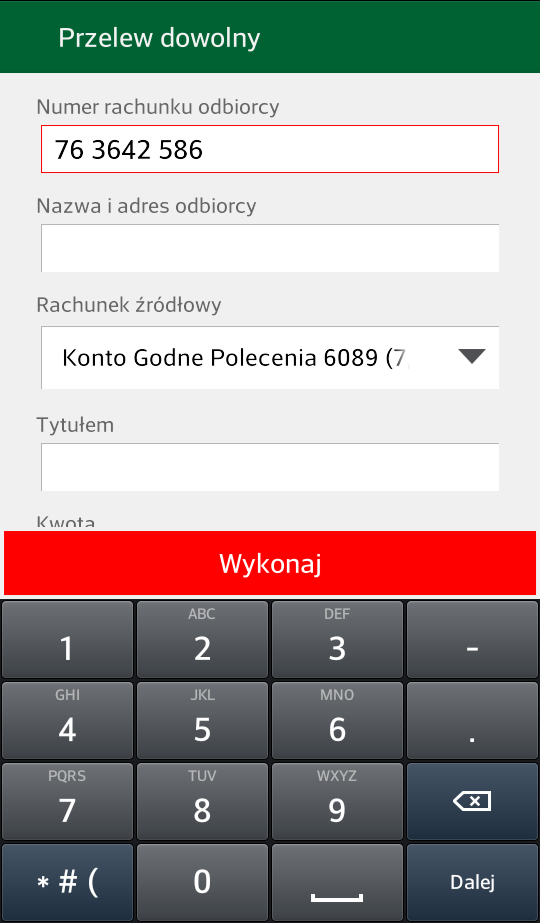 The user can easily verify the correctness of the number entered

In order to reduce the user's effort, it is necessary to provide a numeric keyboard in situations when the system requires entering numeric data. The eurobank application may not provide many improvements to the forms, but it does provide a clear display of outgoing and incoming operations on the timeline, as well as showing the balance after each operation in the history. 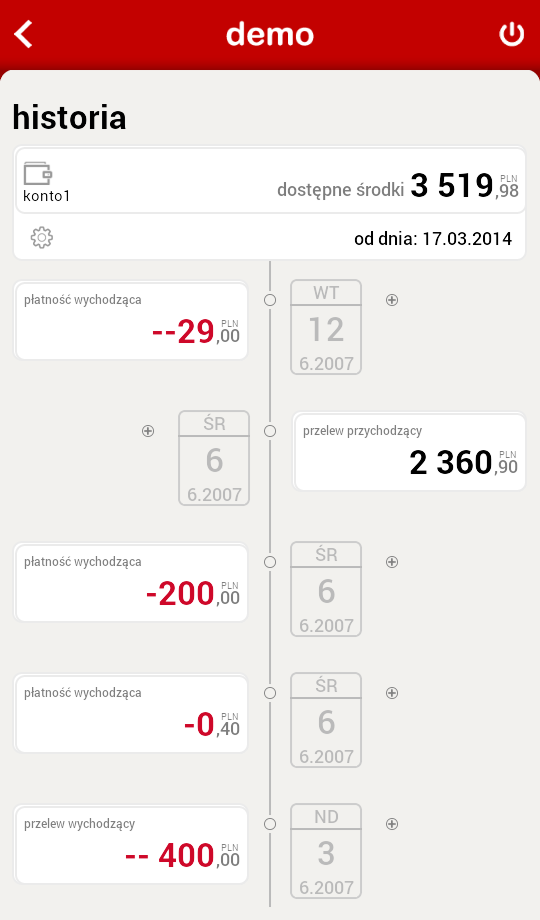 Outgoing and incoming operations were separated on the timeline, thanks to which great transparency was achieved

The solutions such as a summary of available funds from multiple accounts or the ability to save a regular transfer as a template are also a great help for the users. Maybe none of the solutions described above is revolutionary or groundbreaking, but it significantly increases the comfort of using the application.

What applications do not cope with? – usability errors

In conclusion, however, I would like to show that even applications from the first places of the rankings still struggle with various usability problems. These errors may discourage users from using mobile banking solutions or simply limit them to "emergency" situations (i.e. when there is no access to a computer).

Maps showing the nearest ATMs or branches definitely need improvement. In the Bank Pekao SA application, the list of ATMs is displayed on the map with a significant delay, moreover, it is shown at a considerable distance. 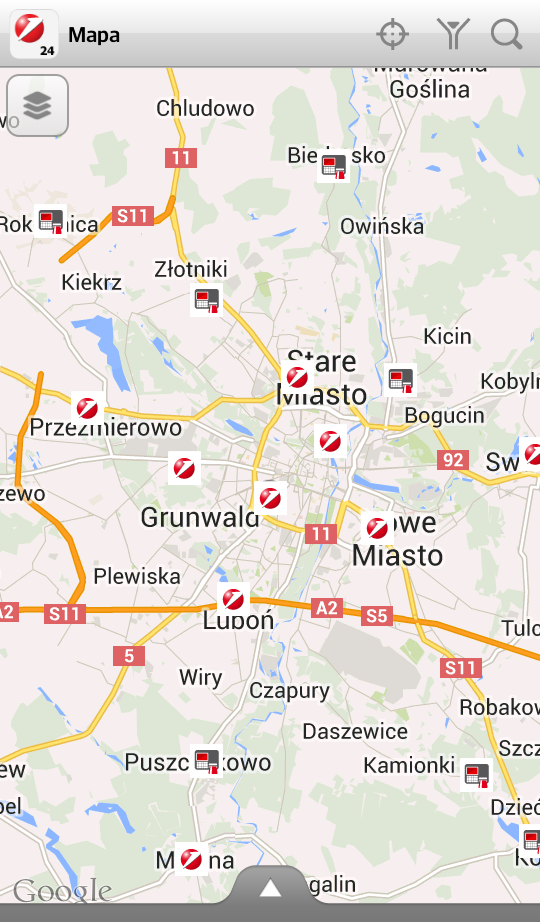 Despite the enabled geolocation service, the user has to zoom in the map by himself

We can still see errors in the forms – too short fields for entering data which do not show the whole account number (Pekao24 application), unintuitive transition between the selection of the transfer recipient type or a daunting number of fields to be filled in for an arbitrary transfer (eurobank application). 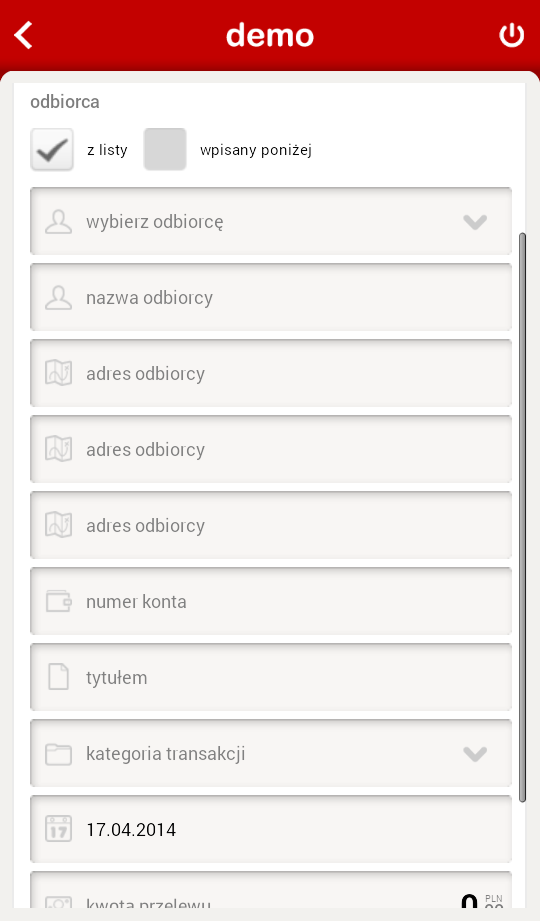 An element that needs improvement in many applications is certainly the presentation of the history, as well as the method of searching for specific operations. It would also be good to work on font size, better selection of icons..

I also wonder if hiding the filters in the bottom panel in the BZWBK24 mobile application or using a microscopic icon in the eurobank application is noticeable to the users. 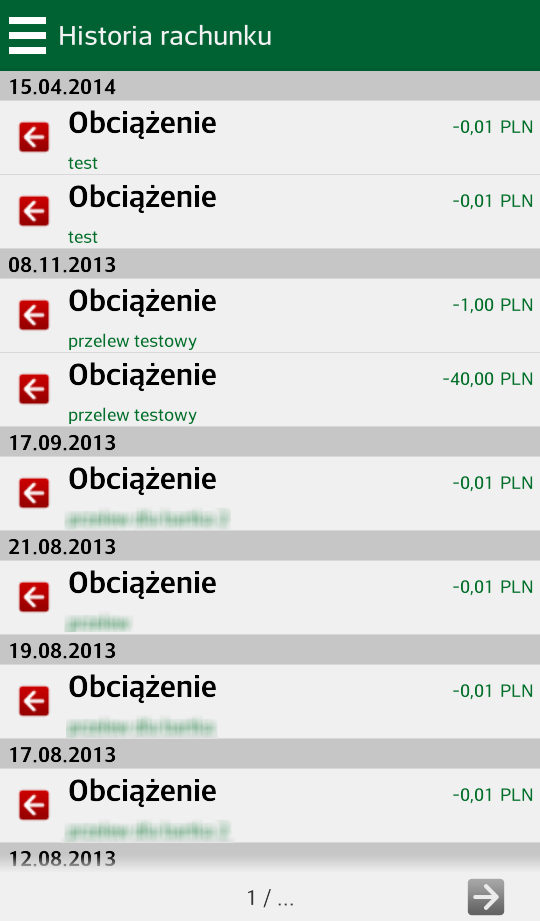 A few words at the end

Looking at different solutions (not only those from the first places of the rankings), it is certainly good that users can use more and more developed applications. This can be seen, for example, on the example of the ranking "Pocket banking applications". We conducted an usability evaluation of the application in Symetria in October last year. Looking at the apps now, after 6 months, it is a pleasure to see that more and more banks are systematically refining the solutions they offer, taking care of the positive reception of the apps among users. 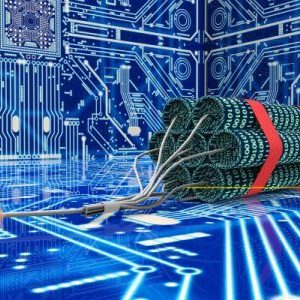