We test the improved version of the Samsung Galaxy Folda

Another year, another IFA. This year I had a chance to visit the biggest consumer electronics show in person again and in a few short reports I will describe to you the most interesting novelties. Samsung Galaxy Fold goes first.

Samsung Galaxy Fold is the first mass-produced phone with a folded screen from the Korean manufacturer. This is also one of the biggest false starts in the history of smartphones. As a reminder – Galaxy Fold was first presented in the first half of this year. After the first reviews it quickly became clear that this is a piece of equipment that is extremely underdeveloped. The main problem was with the screen, which of course did not have a glass surface (then it would not be possible to bend it) but was covered with a protective film that came off quite easily. The catch is that it was not a protective film, but an integral part of the screen. Many reviewers peeled off the film and of course irreparably damaged the phone. The release of the Galaxy Fold to the wider public has been postponed, and in Berlin at IFA 2019 there was a second launch of a revised version of the Fold.

The phone has changed a little in that time. First of all, the "protective film" now reaches the edge of the screen and does not ask to be peeled off. The gap between the hinge and the display has also been reduced, limiting the chance of dirt getting under the screen.

The stand with test models of Galaxy Fold was probably the most besieged in the whole fair, or at least among the stands of Samsung. The queue was long and there was little time to spend with the phone, but I still managed to test it quickly.

A quick reminder of the specifications. Galaxy Fold has a Snapdragon 855 inside supported by 12GB of RAM. For data we have 512 GB available and a total of six cameras, three on the back, two above the main screen and one on the front. The most interesting is, of course, the screen. And actually two screens, because on the front we find a 4.6-inch (840×1960 pixels) with huge borders. But the real magic happens inside – a 7.3 inch foldable screen with a resolution of 1536×2152 pixels and an aspect ratio of 4.2:3. At launch, the phone runs on Android 9.0, support for 10 is of course certain. 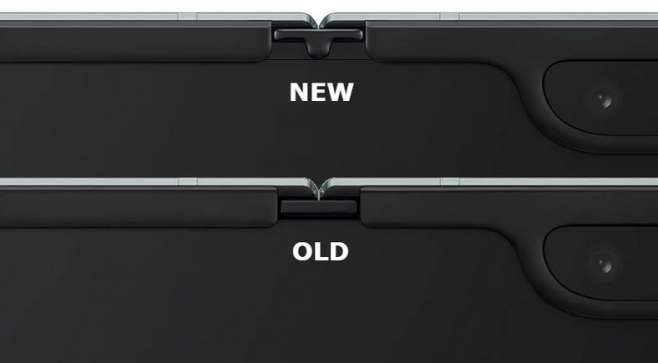 When holding the Galaxy Fold in your hands, its thickness is certainly noticeable – after all, with the screen folded it is like two phones on top of each other. The outer screen is not knockout, the bezels around it deviate from the design for 2019. After opening the smartphone is already much better impression – such a large display must impress. However, they are a bit spoiled by the notch in the screen where the front camera lenses are hidden.

I fired up a few applications – they looked very good

However, I have doubts about the consumption of content on a square display. Videos are in a different format and those black bars at the top and bottom are a bit glaring. But for Instagram it is the perfect screen – photos from this medium fill it practically in its entirety. Such a large screen is also perfect for multitasking – operating several applications at once does not cause any problems (judging by the specification, the hardware can withstand intensive work as well). Switching applications between the external and internal screen was very well solved. When you open the phone, apps open on the front ideally also open on the home screen.

Purely mechanical phone opening works very well. In a complex form it is held by magnets. The hinge works very well, but in the closed position it has two rather large gaps (you can put a folded piece of paper into them) where dust and other dirt can fall.

The most important question – how will the screen behave in the place of bending?

In the copy I had in my hand, the bend was not visible, especially with the app running. The question is whether this will change over time.